Dune (now with some color)

(re-posting these with some flat colors thrown on)

I finally gave in to the siren song of Dune and was dashed upon the rocks like so many concept artists before me. There just isn't time to render these, but I’m reasonably pleased with the linework, so here they are!

Some context: I fell into a Dune-hole recently which started by stumbling across the INCREDIBLE art from what would have been Jodorowsky’s Dune film. That inspired me to re-watch the David Lynch movie again (one of my favorites). At that point, I had to read the book again. In the middle of my read-through, I watched a couple Tarsem Singh movies and my brain made a connection that I couldn’t shake loose:

So, in order to get that thought out of my brain, I took a clumsy swing at designing the cast of Dune through the lens of Tarsem Singh’s crew. To me, that meant making each character an operatic or theatrical expression of their role in the story. Visual storytelling cranked to eleven.

I thought the Atreides  on Caladan should look “water rich”. I wanted to design a visual language that looked like it was born out of generations of ruling a tropical paradise.

Dr. Yueh – The diamond mark of his conditioning becomes a mask, but it’s not %100 effective so it doesn’t cover one eye.

Thufir Hawat – The Juice of Sapho is held in a small vial near his mouth, always near him. He may once have fit his ceremonial armor better, but he’s no less dangerous.

Gurney Halleck – Patrick Stewart was perfect in this role, but in the book he’s described as being a pretty ugly guy. He has blades all over him, and his clothing is tied down tightly for sparring.

Paul – He wears the Atreides Hawke at his breast, with one “red wing” cape over his shoulder. He is dressed for life on his water-rich homeland.

Reverend Mother Helen Gaius Mohiam – She carries branching staff to represent diverging bloodlines.  Her collar echoes the Emperor’s own crest. I wanted to design a motif for the Bene Gesserit with several meanings. Her hair is tonsured like a monk’s, but they wear a braided mohawk like a horses mane to make reference to their ongoing breeding program. They also wear fine chains connected to piercings from their eyes, ears and mouths. This is a visual representation of their constant focus on observation, listening and influence through speech.

Duke Leto – He is described as having a face like a bird of prey, so I exaggerated that. He wears the Atreides Hawke on his chest, with two red wing capes behind him.

The Lady Jessica – She has the Bene Gesserit hair (tonsured with a horses mane mowhawk) and piercings (connecting eyes, hears and mouth). She has a modified version of the Atreides Hawk crest, forming a more elegant cape.

Feyd-Rautha – His build reflects his regular gladiatorial training. I wanted the Harkonnen’s to look like they hung around in their robes all day. I also gave them a consistent jewelry motif that was part viper-pit, part “plans within plans within plans” like a diagram of nefarious connections.

The Beast Rabban – He’s an animal, even less restrained than the Baron. You can see that it’s only a matter of time before he competes with the Baron for sheer scale. He’s adorned himself with cruel trinkets, and what may have once been luxurious furs have become rank tatters through neglect and abuse.

Piter De Vris – Like Thufir Hawat, Piter keeps his Juice of Sahpo within regular sipping distance. His “rig” is built up into a flimsy collar, meant to look arrogant and hint at his aspirations to rule.

Padishah Emperor Shaddam IV – His royal armor is designed to reflect his paranoia (the same paranoia that inspired him to us the Harkonnens to crush the Atreides). Physical descriptions compare him to Duke Leto, so I wanted him to look like a lesser version of the Duke. His armor plates are all given to him by the various guilds and houses he rules.

Sardaukar – The Emperor’s elite soldiers. Their crests reflect the emperors, but are all built from reclaimed prison bars from their hellish prison-homeworld, Salusa Secondis. I wanted them to look completely opposite to the Fremen. They’re big, bulky, heavily armored. The glimpse of armor you can see was designed to look like it would react TERRIBLY to sand. 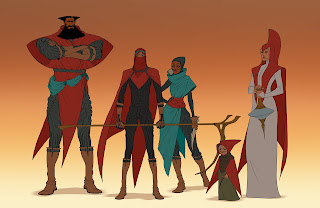 To design the Fremen is to design the Stillsuit. To me, they were done perfectly in the David Lynch film, so I wanted to try to make a different statement.  Fremen don’t care that they smell awful, they accept the realities of their lives, so I wanted to design a suit that didn't shy away from its vulgar processes. It’s designed to process piss, shit and sweat into drinkable water. Seeing a person in their stillsuit should almost feel like seeing them naked.

Stilgar – Sturdy, reliable, and pretty much a surrogate father to Paul.

Muad’Dib – I kept it simple. His outfit is just a stillsuit and the red wing cape of the Atreides.

Chani – Just draping the stillsuit with something asymmetrical and soft.

Great Mother Jessica – Her Bene Gesserit mane is exaggerated in a fabric crest. She holds the water of life in a bottle that isn't meant to be put down.