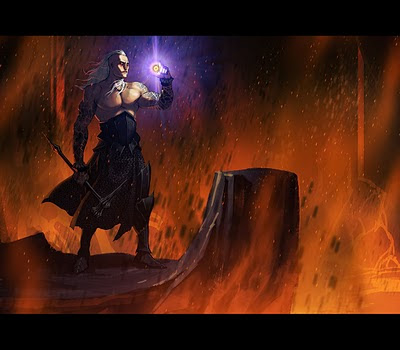 My brother suggested I read the full history of Sauron. It was fascinating, his story is so complex and tragic. I wanted to draw a version of him in his mostly-human form, forging the One Ring. I wanted to making him look like an angel or demi-god in human form, beautiful but scary. His costume is meant to reflect elements of his full armor in the movie (that design was just too awesome to ignore). It's also meant to be somewhat androgynous, as it's a handy way to show that a character is beyond human gender considerations. His arms are coated in ash from the forging process, but that's also a nod to his admiration of Morgoth, who's hands were permanently burnt when he stole the Silmarils. His eyes are like the Great Eye, to keep this design connected to his final form on Middle Earth.