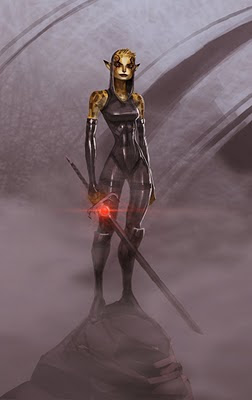 I was never really into Thundercats as a kid and there are dozens of amazing redesigns of these characters. Despite both of these solid reasons, I sketched this up anyway. The only purpose it served was to experiment with some exaggerated anatomy.
Posted by Matt Rhodes at 2:26 PM

Some of the cast of Dragon Age II

From left to right:
Varric, Cassandra, Anders, Aveline, Sebastian, Fenris, Bethany (with her early short blond hair), Merrill, Isabela and Flemeth.
This isn't the full cast, just a selection of characters I was involved in concepting. Thankfully, at Bioware the spirit of collaboration is a cultural norm. It can often be tricky to tell where one artist's work ends and another begins. I wanted to call out the Dragon Age II concept art team, a group of incredibly talented bastards:
Ben Huen
Casper Konefal
Ville Kinnunen
Steve Klit
Ramil Sunga
Nick Thornborrow
Also awesome but no longer at Bioware:
Joy Ang
Sung Kim
Posted by Matt Rhodes at 5:47 PM