These were my submissions for the ILM Challenge, details of which can be found here!

While on a secret mission to Bespin, Biggs got himself tangled up with a rogue Red Guard and the droid mercenary IG-88. 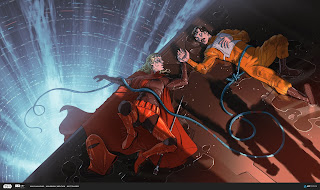 After Han was rescued from the clutches of Jabba the Hutt, the team returns to the Millennium Falcon to regroup. 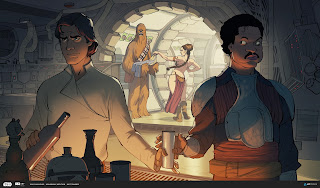 While Jabba was busy feeding prisoners to the Sarlacc, a few opportunists made a break for a better life. Max Rebo stole a skiff from the barge, picking up Malakili, the Rancor Trainer and Oola the Twi'lek 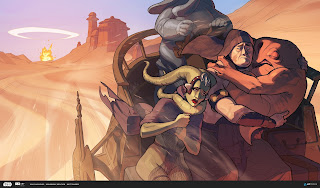 Boba Fett was sent to Yavin to kill Mon Mothma. He ultimately failed his mission when he underestimated her diplomatic prowess. 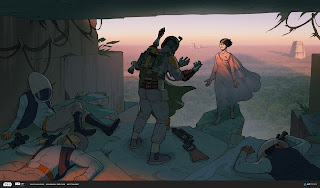 I wanted to design a vehicle whose primary job was to showcase my favorite aspects of Star Wars: swashbuckling, peril, co-operation, and a dirty lived in world. 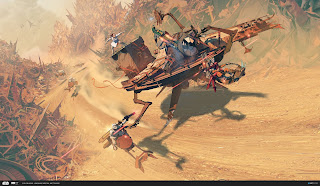 "The Revenge of Alderaan"

Trench runs and exhaust ports are great, but I wanted to explore a more blunt, emotional statement. The Rebels recovered the largest remaining piece of Alderaan, and they're going to punch a revenge-hole. 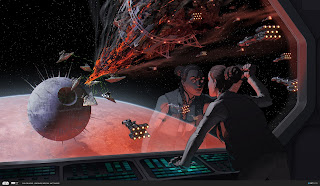 A brave Rebel cuts some wires, releasing the wild animal cages. The Rebels know what the Empire doesn't: that Wampas go after Tauntauns like sharks go after seals. They use the distraction to their advantage. 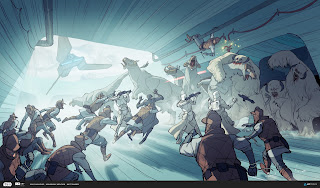 The Wampas and Tauntauns are in a frenzy, cutting a path through the Empire's ranks. The Rebels use this to their advantage to gain ground. R2-D2 and C-3PO are caught right in the middle of the conflict. 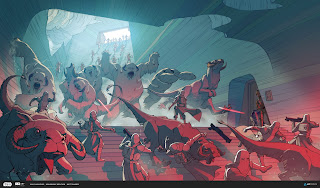 The Fighter is a 2-person craft, pilot and gunner like many star wars fighter craft. It can land on the ground by folding its fore-wings down. You can see in the reference that this is based on an upside down oil lamp. 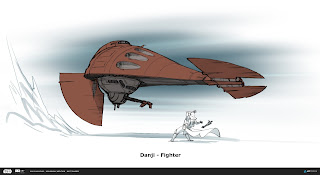 The Carrier is mostly engine. It delivers the fighters to the lower atmosphere, flying overhead and dropping them like seeds. This ship is based off of a sideways Arabian tea/coffee pot. 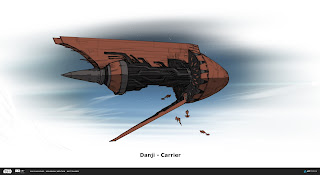 The Starship is made up of Carrier ships, with a head and propulsion at the front and back. It's like a contained fleet, able to house as many Carriers as needed. This shape is meant to reflect a Hookah on its side. 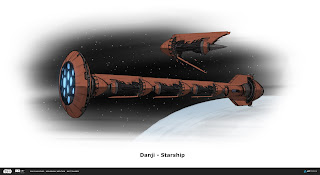 The Danji are arriving in the cavernous, coral-like base of Sookah. They are exiting their ships and marching towards the nervous Rebels. Mon Mothma steps forward, meeting the Danji leader, who removes her helmet... 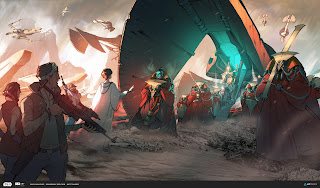 Here's my model sheet for Swana, with DD-3 on her wrist. She's based on Princess Yuki from Hidden Fortress, especially her eyebrows/eyes and her bamboo scepter/whip. It was a cool exercise to elaborate on the version of her from earlier. 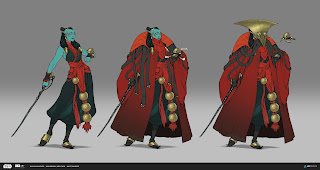 He is very small, so I thought his primary task could be to "mind control" much bigger droids with various purposes (essentially making all droids his "swiss army knife" of abilities). I made him bronze to fit the Danji palette I've been working wit

Swana removes her outter cloak and reveals the plans for the second deathstar to Mon Mothma, R2 and Admiral Ackbar. The plans were stuck in the head of an Empire Droid (RA-7), but DD-3 could extract them. 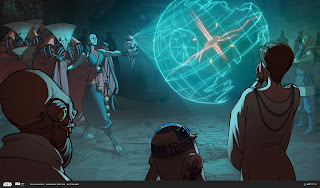 Swana uses her flexible wand to deflect the enemy's weapons in order to engage in hand-to-hand combat. While she fights, DD-3 takes control of nearby droids to support her. 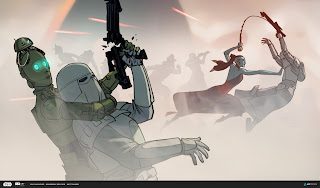 Swana tries to sleep, but DD-3 won't stop chasing R2 around the interior of her ship. 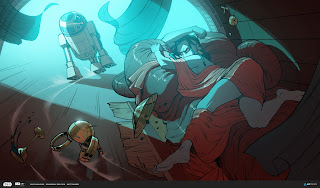 Swana - Aren't you the pilot who did the Kessel Run in fifteen parsecs?
Han - Twelve!

I wanted to echo Swana and Hans conflict with the battle going on behind them. 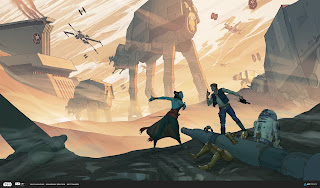 It's always fun to design characters that are clearly up to no good. From left to right is: Bar Maid with her six legs, half-droid bounty hunter Manu Grit, Uru, Yot, big red Crax, multi-armed Myx Dur in front, and spidery Tar Ken. 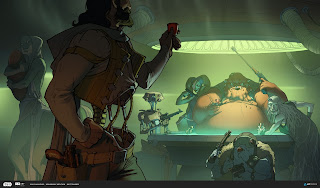